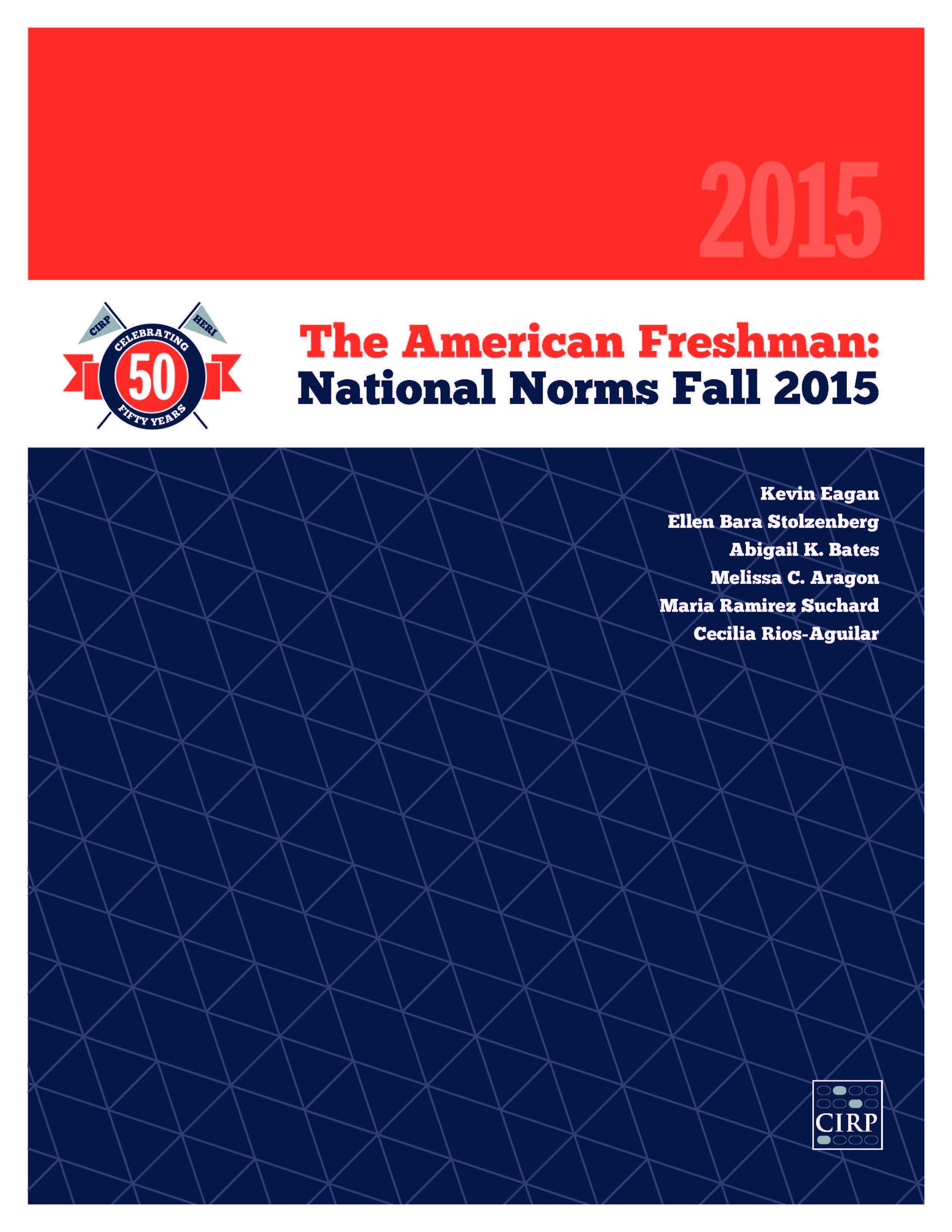 This year marks the 50th administration of the CIRP Freshman Survey and we are excited to celebrate the release of The American Freshman: National Norms Fall 2015. Since 1966, more than 15 million students at 1,900 colleges and universities have completed CIRP surveys. The CIRP Freshman Survey is the largest and longest running survey of American college students.

This past year was marked by intrigue, curiosity, and great tumult. Through use of the imaging spectrometer on the Mars Reconnaissance Orbiter, we discovered that water currently flows on the Red Planet and the New Horizons space probe completed its flyby of Pluto nine years after its launch from Cape Canaveral. In November, the world was rocked by the terrorist attacks in Paris that left 130 dead. The devastating news sent shockwaves across the globe, but an outpouring of support for Parisians only reinforced a greater sense of unity and resolve among the world community. The Black Lives Matter movement surged on in 2015 with urgency to combat an ever growing list of issues of bias and discrimination against Black individuals. Additionally, the Supreme Court ruled in favor of same-sex marriage, thus allowing same-sex couples to legally wed in all 50 states.  Over the course of the last year, college tuition has become a hotly debated topic. Conservatives and liberals alike have numerous plans on how to effectively remedy concerns about costs. The Obama Administration even went so far as to issue their “College Scorecard,” touted as a consumer awareness device, but after harsh criticism the scorecard was abandoned shortly after its inception.

It was in this context that college freshmen were entering higher education in the fall of 2015.  Other findings highlighted in The American Freshman: National Norms Fall 2015 include:

One new question introduced this past year asked students about their participation in a summer bridge program:

Summer bridge programs are a type of college transition intervention that occurs during the summer before the freshman year and are designed to help students transition to the college environment. Responses from this question revealed that 5.6% of incoming freshmen participated in a summer bridge program, many of these students participating for one to two weeks.

In general, traditional public school (not charter or magnet) attendance has decreased in the past year (77% in 2014 to 73.9% in 2015) and in fact, it is the lowest it has been since the question was first asked in 2005.  In addition, we have seen the greatest growth in public charter schools (an increase of about 3 percentage points).

Furthermore, in 2015, 77.3% of all traditional public school students were accepted by their first-choice college, compared to only 68.6% of those from public charter schools, and 67.3% of those from private independent college-prep high schools.  One question on the TFS that has been asked since 1978, inquires about students’ experiences with special tutoring or remedial work while in high school and expectations for needing it in college:

Have you had, or do you feel you will need, any special tutoring or remedial work in any of the following subjects?

As we continue to celebrate the 50th anniversary of the CIRP Freshman Survey, please join us at several national conferences to share in the festivities:

More detailed information about the receptions to come.