Figure 1 presents the general analytic framework for the project. We began collecting data in the fall of 2004 as our participants first entered college. In the spring of 2005, we followed up with these students using CIRP’s Your First College Year (YFCY) survey. In the spring, summer, and fall of 2008, we followed up with these students for a second time – four years after they had initially entered college – with the College Senior Survey (CSS). During the 2010-2011 academic year, we will follow up with students for a third time with the Post-Baccalaureate Survey to determine the pathways students have chosen for themselves more than six years after initially beginning college. 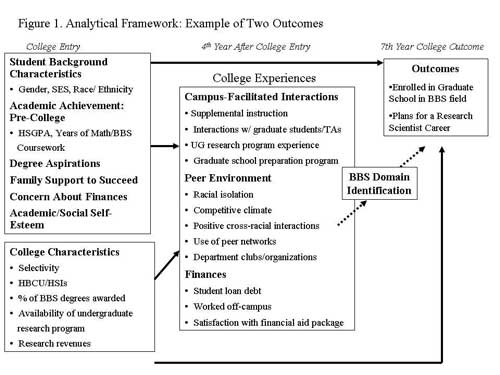 In addition to the student surveys, we have collected institutional data from the colleges and universities these students attended. During the summer of 2009, we are administering a Best Practices Survey to our participating institutions to learn more about the opportunity structures that students encounter on college campuses. We also have relied on data reported to the Integrated Postsecondary Educational Data System (IPEDS).

Since 2004, we have conducted student focus groups, interviews with undergraduate research program administrators and faculty, and surveys of introductory courses. We also have supplemented our student survey data with information from the College Board and the National Student Clearinghouse. These sources of data have created an unprecedented database that not only includes information on students’ attitudes, college experiences, and life objectives over time but also track students’ enrollment patterns and standardized test scores.

The key components of the project include:

2004 CIRP Freshman Survey: CIRP data collection provided the universe of institutions and students that served as the basis for selecting a follow-up sample of 25,000 underrepresented students and a comparison sample of 25,000 white and Asian American students.

2005 CIRP Your First College Year Survey: The YFCY followed up with the baseline sample from the Freshman Survey and collected data on more than 5,000 students across 160 institutions.

2005 College Board Data: We merged in data on students’ standardized test scores.

2005 Integrated Postsecondary Educational Data System (IPEDS): We merged institutional data collected by IPEDS with our longitudinal survey data to learn more about the resources available to students at the institutions included in our sample.

2007 Classroom Survey: We administered a survey to students enrolled in introductory courses at five campuses (2 PWIs, 1 HBCU, and 2 HSIs) to examine how students develop the skills and dispositions necessary for success in future science and math courses.

2007 Campus Site Visits: We conducted five campus site visits during the spring and fall of 2007. During the site visits, we conducted student focus groups with participants in undergraduate research programs to learn about their experiences in those programs as well as their experiences with their science majors. Additionally, we interviewed faculty and staff charged with administering these undergraduate research programs that are geared toward underrepresented racial minority students in the sciences.

2008 College Senior Survey (CSS): We began administering the CSS in the spring of 2008 to an expanded sample of students and institutions based on additional funding from the National Science Foundation (NSF). This expanded sample included all of the original baseline sample as well as students majoring in engineering, technology, mathematics, and sciences outside of the biomedical and behavioral science majors. The CSS included questions related to students’ satisfaction with various aspects of their college experience, activities in which they participated during college, attitudes about political and social issues, and future life goals.

2009 National Clearinghouse Dataset: Late in the summer of 2009, we intend to collect and merge data from the National Student Clearinghouse. These data will enable us to examine enrollment patterns of students as well as how students evolved in their selection of a major. These data will represent the primary source of information for STEM and behavioral science retention and degree completion studies.

2010-2011 Post-Baccalaureate Survey: More than six years after our 2004 cohort first started college, we will administer a third follow-up survey to them. This survey will ask students specifically about their experiences since the spring of 2008 – whether they have enrolled in graduate school, taken jobs in STEM-related fields, or pursued other career trajectories. 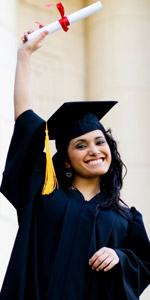