In 2008, great changes occurred in the United States and globally, including the election of Barack Obama and the Great Recession. Most of the media attention regarding the great recession did not begin in earnest until the fall of 2008. There were several events that led to the financial crisis. The Federal Reserve continued lowering interest rates throughout 2008 to spur growth in the declining housing market, and Bear Sterns, a brokerage firm, collapsed in March of 2008. The feds took over Fannie Mae and Freddie Mac in September of 2008, and the next week Lehman Brothers filed for bankruptcy. The impact of the crisis was felt in higher education. Endowment values decreased substantially, students’ ability to afford college was hampered as home values dropped, and many colleges tightened budgets by asking faculty and staff to reduce salaries, lay off personnel, or cut academic programs.

Did the Great Recession impact students’ long-term post-college goals? It is important to note that by the time Lehman Brothers filed for bankruptcy the Freshman Survey administration was closed.  Therefore, incoming students responses were not influenced by the main thrust of the financial crisis that preceded the Lehman Brother’s collapse.  However, it is possible that students may have been influenced by the media coverage while the survey was open during March 2008 to late September 2008.

The TFS has been asking students about long-term goals since 1971. We have found that the student responses have varied across the years.  What is relevant is how students have internalized or perceived the economic crisis in their long-term goals.

The top three goals in 2007 and 2008 were the same: “raising a family”, “being well of financially”, and “helping others who are in difficulty” (See Figure 1). There was a 3.7 percentage point increase in students reporting it was essential to be well off financially. On the other hand, there was a 0.6 percentage point decrease in students saying that raising a family was an “essential” goal for them. More than one-quarter of incoming students indicated that helping others in need was an “essential” goal.  In sum, the overall trend of college goals was not affected, but we do see a slight bump in the proportion of students placing greater importance on being well off financially. 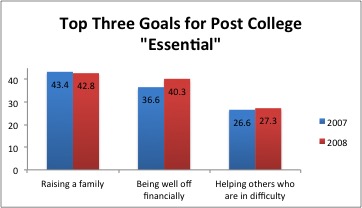 The election of Barack Obama was one of great hope and optimism. Many hailed the election of the first African-American president as evidence of a turning point in race relations in the United States. As part of the 2008 TFS, students were asked if they agreed with the following statement: Racial discrimination is no longer a major problem in America.  Overall, only 20.1% of students agreed or strongly agreed that racial discrimination was no longer a problem. However, when examining differences in views by race, 22.1% of white students agreed or strongly agreed while 13.3% of black students agreed or strongly agreed. Thus, shortly before Barack Obama’s election as president, black students still were much more likely to feel that racial discrimination was a problem in America compared to their white peers. It is important to note that the TFS was administered and closed before the election took place.

Also in 2008, The Pluralistic Orientation scale was introduced on the TFS.  The scale was designed to measure skills and dispositions appropriate for living and working in a diverse society. Of the incoming students, 25.8% had a high pluralistic orientation score while 45.5% had an average score.  Despite these pluralistic orientation scores, there are still pending issues on campuses around inclusion and equity.  Campus movements such as IAMHARVARD, Being Black at Michigan and Black Bruins are speaking up and calling out administrations for their lack of efforts in fostering inclusive campuses.  These student activist efforts have demanded change. Most recently, students at the University of Missouri accomplished removing the president and chancellor of the university for their inability to address racial issues on campus.

85.9% of incoming students discussed politics in the last year either “frequently or occasionally”.

11.8% of incoming students worked on a local, state or national political campaign in the last year either “frequently or occasionally”.

25.7% of incoming students participated in political demonstrations “frequently or occasionally” in the past year.

Indicate the importance to you personally of:

Becoming accomplished in one of the performing arts (acting, dancing, etc.)
Becoming an authority in my field
Obtaining recognition from my colleagues for contributions to my special field
Influencing the political structure
Influencing social values
Raising a family
Having administrative responsibility for the work of others
Being very well off financially
Helping others who are in difficulty
Making a theoretical contribution to science
Writing original works (poems, novels, short stories, etc.)
Creating artistic work (painting, sculpture, decorating, etc.)
Becoming successful in a business of my own
Becoming involved in programs to clean up the environment
Developing a meaningful philosophy of life
Participating in a community action program
Helping to promote racial understanding
Keeping up to date with political affairs
Becoming a community leader
Improving my understanding of other countries and cultures